AFTER the final examination of her two-year National Diploma (ND) programme, Laide Johnson (not real name),  a 21-year-old student of Geology at the Polytechnic Ibadan travelled home to Ilaro, Ogun State, for a short holiday.

She was excited to be back home with her parents after about two years away from her loved ones.

As is the practice with other polytechnics, in her school, every graduate at the National Diploma level is required to undergo a compulsory one-year Industrial Attachment (IT) before proceeding for the Higher National Diploma (HND).

So, after spending a few days with her parents, Laide decided to return to school to get a letter of introduction and application for a place for an internship with an organisation of her choice.

She was accompanied by Joke Adeola, her cousin, also a student in the school. At the time, some of her colleagues had collected the same letter from the Industrial Trust Fund (ITF)/SIWES office of the institution and were already making moves to start their industrial attachment.

However, Laide’s case was different—securing a letter for her IT became a Herculean task.

She had what she described as her worst nightmare after an official of the polytechnic told her to have sex with him to collect the IT letter.

On March 3, she visited the ITF office at about 10:00 am but, to her surprise, the officer in charge, identified as Adebayo Akande, told her the collection period had lapsed.

But, after much persuasion, Akande, a non-teaching staff, demanded N1,000 rather than the N200 fee charged for the form and payable to the school’s Micro Finance Bank.

“Last year December 23rd, when I wanted to do my IT, I visited the ITF office and I paid N200 into the school microfinance bank,” Adeola disclosed.

But in the case of Laide, at the point of collection, the school official responsible for the issuance of the letter swiftly twisted his demand and asked if he could have his way with either student.

“… he asked if my cousin can ‘play’ with him. And I asked how?”  Laide recounted.

“He then responded saying if I know I wanted to get my IT letter, one of us must ‘play’ with him. So, he requested my name and that of my cousin.”

“I told him I was willing to give him any amount but he insisted that he wanted sex by all means.”

For long, Akande troubled Laide, pressuring her via phone calls. So she decided to play along in order to gather evidence against her tormentor.

The ICIR reached out to Adeola to verify claims made by her cousin and she affirmed what her cousin said.

“The man said the letter was finished, so as we were about to leave, he called us back and charged N1,000. Eventually, he collected my cousin’s number that whenever he is through, he would call her.”

Asked if Akande did make sexual advances to them, “Yes, the man said it,” Adeola affirms. “He said I should give him my number but I did not because I did not have anything to do with him, Not until this morning that he said she should come to a hotel to collect the IT letter but before that he would have to have intercourse with her.”

Laide continued with the game

In the space of one week, Akande and Laide had exchanged several phone calls while she made efforts to gather much-needed video evidence.

In one of those phone conversations, the lady recalled how she ran out of call credit and how she explained to Akande who has since been pestering her for sexual desires.

“My call card got exhausted, but I tried to reach out later, yet your number did not go through,” she was responding to queries from Akande.

I have booked a room, meet me opposite Police Station — Akande

On March 8, Akande called to inform Laide that he had already secured a room at Apete, a suburb of Ibadan that shares boundary with the Polytechnic Ibadan. This arrangement was ahead of Monday, March 9, for her to come around, if she was really in need of the said letter.

“This IT letter is one of the rights of the students. It was already paid for. And I’m sure this staff gets his salaries so why does he need to have sex with a student just to give her this letter,” said a friend of Laide contacted by The ICIR.

In a 55 seconds recorded video footage, Akande played the role of a messiah who was trying every possible means to grant unusual favour. In the video, Laide was heard asking a question;”Hope they have signed the letter.”

“Don’t worry, it would be signed by God’s grace but remember our agreement,” Akande said. “I don’t want any issue. I hope you have accepted…? I don’t want a situation I’ll get there and you tell me you are no more interested.” 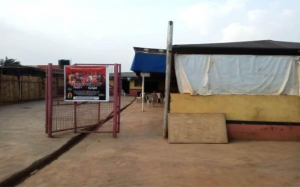 Eventually, at about 4:08 pm, Akande called Laide to meet him at Holab Garden, a relaxation spot beside Samong Filling Station, opposite Apete Police Station, Ibadan.

Meanwhile, the lady had informed the police before arriving at the agreed venue. The police, according to her, also promised to draft some officers to the relaxation centre to effect the sexual predator’s arrest. She was then asked to proceed and play along.

At about 6:00 pm, Akande arrived in a Toyota car with registration Lagos, LND 329 CF.

Few seconds after, Laide went in with him. But while seated at the bar, an unknown person purportedly walked up to the Akande to issue a warning of an impending arrest.

Immediately, Laide began a conversation and they got talking about how she struggled to locate the venue. “Sir, how much should I pay now? she asked Akande.

“At least, we had an understanding. I don’t want you to act funny,” he told her.

A female bartender cuts in, dropping a bottle of Trophy Beer. “What else do you want,” the bartender asked him but he seemed okay with the served drink.

Laide for the umpteenth time asked if she could pay for the form but he got displeased. So, the female student requested to see the IT letter.

At that moment,  a call came in for him and he spent a few minutes on the call. But immediately he ended the conversation, Akande asked if she could pay N5,000.

But in a swift, Akande became anxious as he was really ready to satisfy his lust. “Bami sere nah, she mo ugly ni?”  (“Have sex with me now, or am I too ugly for you?”) he said persuasively.

As the conservation went on, Akande brought out the document and handed it to her. Laide scanned through it joyfully, if it was real. “Yes, it was,” she told herself.

“I can’t lie to you. To God who made me. Only, if you could see the risk I took before getting this. I’m not a bad person at all,” he added.

“See, it doesn’t matter if we ‘play’ together, it will only be between us,” as he pushed further saying, he already secured a room, and he won’t spend much time.

Let’s make love but you will still pay the N2,000 — Akande insists

After so much argument, Laide further pleaded with him, stressing that even while in school during her ND programme, she never had sexual relationship with any lecturer in exchange for marks.

For her, it might be difficult to engage in such an act now that she already had finished the first half of the programme.

But Akande went on with his persuasion, especially how he would remain useful to her in times of need. However, he noted that Laide would still have to pay the N2,000 sum and yet have his way.

When it became crystal clear that she would not budge, he then blamed her for the extra cost incurred to fuel his car to the venue. Then, he jerked up the sum to N5,000.

When Laide stood up to make calls to raise the money, he queried her for making the calls but she explained that she had to contact someone who will bring the N5,000 over.

At this point, Akande started getting suspicious. Sadly, the police operatives Laide had earlier informed, were yet to arrive.

Eventually, he dropped the letter and left. 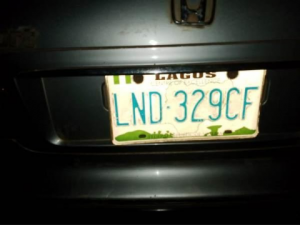 “We got the IT letter but he escaped,” the lady told The ICIR said. “One of the staff of the bar gave him information. So by the time the police came, he already left.”

Laide also observed how unsettled Akande was since she started making calls in an attempt to raise the money he asked for. She said someone alerted Akande of a possible setup, “so he asked me to go.”

Shortly after, he entered a grey Toyota car with registration number Lagos LND 329 CF and drove off. It was later discovered the car belongs to his friend.

“The police tried to chase him, but they could not ascertain his whereabouts,” she added.

When contacted for comments on the sexual advance allegation,  Akande denied ever making any sexual demand on the student.

He gave his name as Adebayo Adetunji but the Truecaller App revealed him as Adebayo Akande. He admitted having a meeting with Laide at the venue yet denied any monetary or sexual demand from her.

“Yes, I know her but I did not have anything with her,” he said.

“I asked her to come and meet me at the bar where I normally relax to give her the form free without collecting any money,” he responded to a question on whether or not there was a meeting between him and the lady.

“So please the issue has been resolved and I am no longer working there (the ITF office).”

He was asked to identify the plate number of the car driven to the garden. But, he claimed the car belongs to his friend.

Akande later told The ICIR that he was a casual staff in the school but decided to leave his job since the parents of the victim got involved in the matter.

He said the victim’s parents eventually intervened in the matter but he was warned to avoid such behaviour in future.

The ICIR reached out to Soladoye Adewole, Public Relations Officer of The Polytechnic Ibadan, to clarify if the form was actually late, the right sum payable by students and the demand for sex allegation against Akande.

There have been growing cases of rape and other forms of sexual assaults across tertiary institutions in Nigeria. In most cases, lecturers and non-academic staff are the culprits.

The case of Olabisi Olaleye at the Obafemi Awolowo University (OAU) Ile-Ife, Osun State and Tene John, ex-staff of Nigerian Institute of Journalism are just two examples of sexual harassment in Nigeria’s institutions of higher learning.

The incidence of sexual abuse or what has now been tagged “sex for grades,” has been on the increase while government at the state and federal attempt to find ways to address it.

According to the United Nations Children Fund (UNICEF) data on sexual violence on children and women, about four per cent of women and men between age 18 –29 experienced sexual violence by age 18 in Nigeria.

This story was first published on The ICIR by Gbenga Adaniki

This site uses Akismet to reduce spam. Learn how your comment data is processed.