Following the death of Uwa after being raped and maimed at a church in Benin, social media has proven to be an effective tool for women to name and shame their abusers, especially women in Nigerian universities.

Drawing inspiration from women on the social media app, a group of women from Nigerian schools recounted similar stories of sexual harassment by a man known as Anthony Ndukwe, a recent graduate of law at Babcock University, Ilishan in Ogun state.

Tony, as he is popularly known, graduated from Babcock university from the Faculty of Law on the 2nd of June 2019 and almost a year later, he was accused of sexual harassment, public exposure, sleeting and coercion on Twitter. 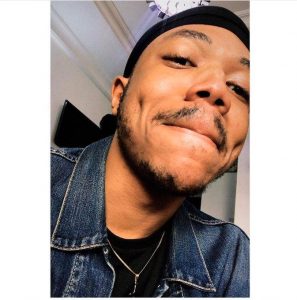 A source on the matter, Miss Rume Ohimor, revealed that Tony finished last year and could not go to law school due to the fact that he failed to meet the requirements for entry.

She stated that Tony was not only accused by Babcock university students alone but he was also exposed by his secondary school mates from The Ambassadors College, Ota, whom he also harassed.

“Because he’s been doing this since his secondary school and a few victims reached out. Even when he was on vacation at home,” Miss Ohimor explained.

It was revealed that Tony has been involved in this heinous activity since he was in secondary school and some of his mates came on Twitter and other social media to narrate their ordeal and their common experiences with him while they were in school.

Additionally, some victims who are students at Babcock University released their conversations via social media- Twitter, Instagram and WhatsApp including screenshots as proof of the allegations.

Twitter user, @FrancesObonna, revealed the experience she had with Tony during her secondary school days which almost made her commit suicide due to embarrassment.

She tweeted: ”In 2013, I attempted suicide by overdosing on Antihistamine because my story had become public and also the truth had been twisted. I was ashamed, scared and also not ready to deal with the drama. I was head of Press Club and also working with Junior Church. My rep was ruined.

“I had heard of @tony_duks and his escapades, How he used to disvirgin juniors and how he was a “bad boy”, I was in SS3 and he was my classmate, never in my wildest dreams would I imagine that my story will be the infamous one that will confirm the rumours.”

Another young woman who attended The Ambassadors College (TAC), Tony’s secondary school, shared her experience on how Tony had defiled her and her friends.

She said: “A certain percentage of girls that went to TAC was, at some point, sexually harassed by Ndukwe, including me. I know someone that he also fingered till she bled.”

Back on Twitter, a lady known as @AnnaDanBIB, published a tweet on her timeline saying: “I can comfortably call Tony a rapist.”

@Lord_Adura tweeted: “He asked me if he can touch my ass for 15 minutes, I said no. He brought his prick that I should touch it, no again. At this point, he was a complete stranger but I found out his name and was told he already had the reputation of being a perv.” 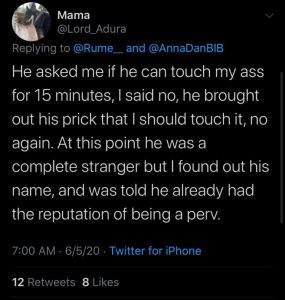 A victim who pleaded anonymity said: “Tony is a perv. He has a whole cloud folder of the nudes of girls he has been involved with. I know mine is somewhere there too. Sex tapes and all.

Bolatito narrated that: “Tony texted me on Instagram, told me had seen me in school and we should hang. I think it was during summer school and we never got to see because I was on the main campus but we would video call.

The alleged rapist, Tony, on his twitter handle @tony_duks and on Whatsapp revealed that all allegations levelled against him were true.

He said: “These stories are true. At the time I justified my conduct because I was too narrow-minded and blind to see beyond my depravities. Now, I now understand the lasting impact that my actions had on these women. I acknowledge that I have demeaned and degraded these women and refused to first see them as fellow people worthy of respect and dignity and a choice to what they want and don’t want to do.

There is nothing worse than living with the fact that you have hurt or wounded someone else and I cannot even begin to imagine the extent to which I have inflicted these emotional scars on these women. This is a burden I will have to live with now.”

As the national conversation on sexual assault, rape and consent continues, a non-governmental organisation known as The Consent Workshop (@ConsentWorkshop on Twitter) is leading a 21-day campaign on consent in an attempt to spread the knowledge of consent and help people recognise when they have been sexually harassed.

This was first published by Campus Reporter

This site uses Akismet to reduce spam. Learn how your comment data is processed.